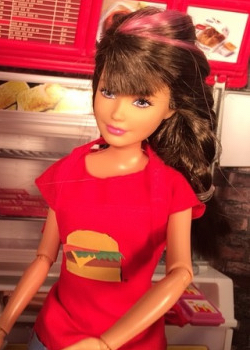 Skipper Roberts is one of the main characters in the Barbie Parodies.

Skipper was born to Barbie Roberts and Ken Carson when they were seventeen years old. She was conceived on prom night.

In the episode "The Future," Barbie hits her head and is transported to an alternate future reality where Skipper is married to Anslem and has four children. She has long outgrown her hipster phase, growing up to be a nurturing mother. Her hair is blonde as she does not dye it anymore.

Skipper no longer holds any resentment towards Barbie, as she recognizes her behavior was a result of her traumatic upbringing. She even goes as far as to openly call Barbie her mom.

"Back to the Future" reveals that no matter what Barbie does, Skipper's future remains the same.

Skipper has a general disinterest in the craziness surrounding her and tends to distance herself from her family in order to avoid embarrassment. She does, however, love drama and will occasionally go out of her way to provoke it.

Due to Barbie's disinterest in caring for her and her sisters, Skipper has taken on many responsibilities.

In the episode Prom, Skipper's boyfriend, Anslem, texts her that he's not coming which causes her to get extremely emotional up to the point of her hugging Barbie and even calling her mom.

After Anslem changes his mind and shows up to prom, Skipper asks Barbie to never mention this again (unaware that her meltdown was secretly recorded by Stacie).

This is a gallery of photographic still released to promote the character (The gallery is located at the bottom of the page).